"And the Price She Paid" (From the Archives)

Some critic once described "Sour Girl," from STP's album No. 4, as Beatles-esque. But if ever there was a time when Stone Temple Pilots truly paid homage to the Beatles, it was here in "Pretty Penny." When I listen to it, I think of "Love You To," "Ticket to Ride," "Norwegian Wood," and maybe even "Eleanor Rigby." That's the first thing "Pretty Penny" has going for it. But there's something better and deeper going on here, as well.

If you listen to songs for their musical structure rather than their sound alone, you'll notice something pretty interesting here: Dean DeLeo not only infused clear Beatles-type flourishes, but he also gave the song a structure that closely follows that of "Ticket to Ride." (Indeed, the multi-bridge structure echoes two other tracks from the '60s--"You've Lost that Lovin' Feelin'" and "Good Vibrations.") However, the most surprising thing about "Pretty Penny," ultimately, is the fact that it was recorded on an eight-track device (according to multiple interviews given by band members), and yet there is as much depth to this song as any other on the album. 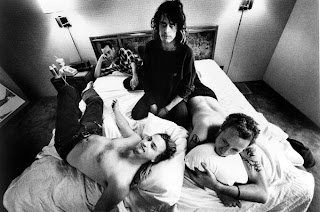 Another aspect of the song worth noting is its lyrics, which seem to have been influenced by John Steinbeck's 1947 novella The Pearl. Of course, this is based on my vague memory of that work--which I read about, oh, a decade ago and *cough* hated. The point, though, is that Weiland is a multi-faceted guy, the kind who doesn't mind dropping a literary reference from time to time. And that, ladies and gents, is a sure way to this girl's heart.

Fun fact: on STP's greatest hits DVD (featured as part of the Thank You two-disc package), there is a "bootleg" video of the band recording a take of "Pretty Penny." At the very end, the camera zooms in on Robert DeLeo's face, and you can tell he knows that they've stumbled upon something really special. He was totally right.