He had several names and many more faces throughout his career, but most of us knew him as David Bowie. Whether your first exposure to him was as musician Bowie or actor Bowie depended partly upon your parents' willingness to subject you to Labyrinth as a child and/or your own musical awakening during high school. As for myself, I came to his work through my favorite band, Stone Temple Pilots.

Many years ago, when MTV Unplugged was a (glorious) thing, STP had their own episode, and part of it ended up cut from the broadcast, though it lived on in bootlegs, pre-iTunes but post-Napster. This was a live cover of "Andy Warhol." As soon as I learned that David Bowie was the original artist, I booked it over to the store and snapped up a copy of Hunky Dory. That was the day I fell in love.

Bowie speaks to adolescents in particular because he was weird. This isn't a bad thing, but it's the most accurate word for him. As the saying goes, he let his freak flag fly, and with every iteration of himself that he presented to the world, he touched some misfit somewhere, from the streets of London to suburban Detroit and everywhere else around the world.

I was fortunate enough to see him live in concert in January 2004, during my senior year of high school. He was touring in support of Reality and played at the Palace of Auburn Hills (home of the Detroit Pistons). The seats weren't great, but I was as enthusiastic as I've ever been, and with good reason: that show remains the best performance I've ever seen, even 12 years later. I also feel lucky, because time proved that this run of dates made up his final trip around the world as a touring artist.

At the concert, I bought a poster that I've had ever since. It's lived with me in Michigan, in North Carolina, and now in Louisiana. Right before I left home to come here, I went on a rampage through the house, desperately trying to locate said poster; I knew I couldn't live without it, because I feel like it's part of what makes my space my own. 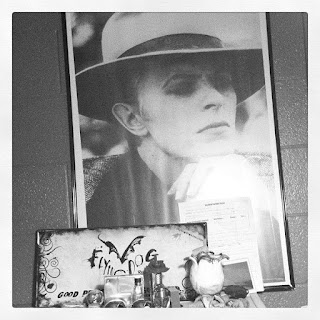 He's been watching over me since I was a teenager, and I hope he never stops.

You know that Ben & Jerry's flavor, Half Baked? Of course you do, because it's the best possible combination of stuff: delicious ice cream, chewy brownies, and sweet cookie dough. It's everything your grandmother ever told you not to eat (heyyyy, raw batter), but it works. The problem is, not every half-baked idea turns out to be as genius as Half Baked.

But I encourage the examination and occasional pursuit of half-baked ideas in writing. This is why: you never know what idea you may be able to extract from that blog post/poem/short story that will serve as the catalyst for a new piece, or what great turns of speech you can lift and drop into a newer, better project.

Who knows? Maybe someday your half-baked something will turn into the next Half Baked, and then people all over the world will know your name. The truth is, you never have to tell them that the situation began in a dire way.

Email ThisBlogThis!Share to TwitterShare to FacebookShare to Pinterest
Labels: writing

In what I would perhaps call the least surprising turn of events ever, Scott Weiland of Stone Temple Pilots, Velvet Revolver, and an underrated solo career was found dead on his tour bus in Minnesota the day after I went on my holiday hiatus. As far as I'm concerned, most celebrity deaths are sad but inevitable--we all grow old and die, or fall victim to freak accidents, or what have you. And I would tend to include Weiland's death in that category, except his life's work had such an impact on me that I feel compelled to comment on it now.

Some of you are undoubtedly aware of my long-standing fascination with Weiland. He served as both role model and cautionary tale to many, and among my many connections on Facebook, a handful mourned the loss, citing STP and Weiland's voice as essential to the soundtrack of their lives. Two of my friends made sure to text me and ask if I was all right after receiving the news, and two others made contact with me to discuss the event.

Personally, Weiland left a long trail of destruction behind him, and in some cases, he did so professionally, as well. This is not a news flash in any way; Weiland was probably as famous for his struggles as he was for his music. Yet people have been lining up to eulogize him: the front page of AlternativeNation.net was basically one big Scott Weiland tribute site in the week following his death, Craig Jenkins over at Noisey wrote an excellent article about Weiland, and Billy Corgan also had kind words to share.

I don't think I can add much of anything to the conversation, having been only a fan and not a contemporary or even acquaintance of Weiland's. But I can say this: to me, Scott Weiland's voice sounds like home. Maybe it's because he and I both grew up in the Midwest, and so I literally hear the speech patterns of my people in his singing style. Or perhaps it's because I've been a fan since I was 14 years old, which amounts to about half of my life.

In the absence of any meaningful contribution, I'll leave you with this, one of my favorite Stone Temple Pilots songs and a testament to Weiland's vocal ability:

I had a tradition on my first blog, What We Covet, of starting each new year off with a playlist of music I intend to take with me throughout the year. As with the previous lists, the songs were culled from my current collection. Most aren't recent, but they certainly sound good to me, and that's really the goal of any playlist I ever make. They come to you in no particular order. I hope you'll check them out, if you're not already familiar with them. Enjoy!
***
1) "Victor," Prinze George

Last summer, I worked for a company that had a corporate playlist, so no matter which of their stores you entered, the soundtrack was the same. This was, far and away, the best song I heard during my time there.

"Devil's Whisper" was a staple for me when I first arrived in Louisiana because I heard it somewhere within days of arriving and it would not leave my brain. Raury's habit of melding rap, pop, and something else entirely makes him a fresh, standout voice.

This one kept popping up on Pandora at work, and it makes me want to dance (very poorly, because that's how I roll).

4) "You Rock My World," Michael Jackson

For a number of reasons, Michael Jackson's latter-day output doesn't get the kind of respect his '80s material did, but I think this song--which is more chill than some of his dance jams--is catchy enough to warrant inclusion on this playlist. (Plus I can't resist Chris Tucker's role in the music video. It's a must-see for all Rush Hour fans.)

Technically, this should be a Halloween, not a New Year, song, but I don't care because a) Donovan, b) Donovan, and c) Donovan. I rest my case.

My mother sent me a wreath to decorate my office this past Christmas. I decided to call it Awreatha Franklin. And so here, in honor of Aretha AND Awreatha, I give you one of the greatest recordings she (Aretha, that is) ever made.
8) "Hypnotic," Zella Day

This song is honestly not that great (compared Day's other output), but it's catchy as hell, and it gets stuck in my head on the reg. Thus I share it with you.

I invite you all to make your own playlist for the coming year, and share it with me if you're feeling confessional!