If you were suffering under the delusion that my October soufflail would deter me from revisiting that pumpkin cookbook of my mother's, you were wrong. So it happens that the second Food Food Food post starts much like the first: with a can of pumpkin guts.

Look, it's not that I didn't want to move on to different things. I did. But that stupid orange book was taunting me, okay? I couldn't let it defeat me. So I drove to the grocery store in my yoga pants and marched myself around until I found the ingredients for something called a Pumpkin Cream Cheese Pie with Sour Cream Topping.

Let me be clear: this was not a cheesecake. It was closer to the texture of a chocolate silk pie, or maybe a cheesecake if cheesecake came in a semi-wet chiffon variety. I should also tell you now that the recipe called for no pumpkin pie-type spices, only grated lemon peel and vanilla. That felt wrong to me, so I ditched the lemon and substituted ginger and nutmeg (which items we already had at home). 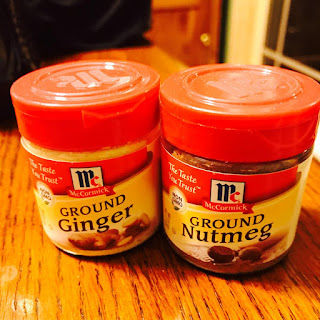 I felt that I had the advantage this time. There were few ingredients, and everything was simple (i.e., no stiffly beaten anything this time). The sour cream topping was so easy to make that I wasn't sure what to do with the extra time I had, other than taste-test it; it's pretty much my new favorite thing.

That required only sugar, sour cream (I used lite), and a touch of vanilla. I mixed it in a cereal bowl with a fork. It would have taken someone with far fewer skills than I have to mess it up, I think. But I also had a secret weapon: real Mexican vanilla. 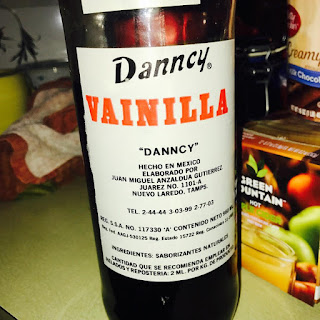 I'm not sure we've ever had a brand of vanilla other than Danncy in our house. Mom picks it up in Tijuana when she gets the chance, and a single bottle lasts approximately one million years. The rich brown liquid smells and tastes incredible and smooth, and I highly recommend it.

The pie itself was a cinch, in part because I used a store-bought graham cracker crust. Aside from that, it came together quickly and baked up in about 45 minutes. Before I added the topping, it was a light beige-orange, and it smelled like fall. 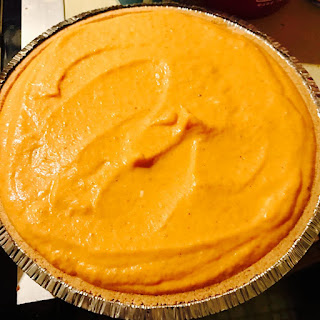 Because the crust was threatening to burn, I had to take the pie out of the oven before the topping fully set up, so it was less meringue-like than I suspect it should have been, but it still tasted good. The sour cream added just the right acidic notes to the dessert, and the texture of the pie still felt like a classic pumpkin pie, but overall it was lighter than that more traditional option.

Although I did feel that the pie itself was a bit on the bland side, I'm happy to report that neither of my parents rejected the endeavor this time (I still can't blame my mom for not wanting to consume the first experiment). 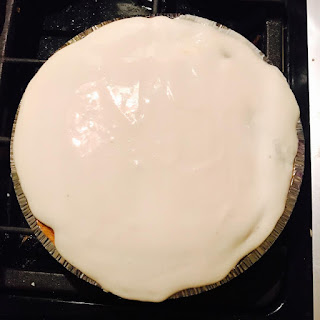 My hope is that I'll continue to focus on seasonal fare, although perhaps in the future my efforts will line up better with my blogging schedule so I'm not consistently behind the times with my posts. If anyone has suggestions or requests, let me know, as I have yet to decide what I'll make next!

PS For copyright purposes, I won't be sharing the exact recipe here, but if you're interested, e-mail me at CateIsMilesAway@gmail.com for more information.
Posted by Cate at 7:28 AM No comments:

Hey, it's Valentine's Day, so why not talk about rejection for a minute? But this time, it's different, because it's all about you and something you should know.

It's okay to reject your own work.

Literally everyone who has ever taken a creative writing class has heard that phrase, "Kill your darlings." Usually it's in reference to a line or two that you really love but which don't quite work in the poem or story you're writing, or sometimes it's about characters who don't belong. But sometimes we have to take that saying to the next level.

Kill entire manuscripts if you have to. Don't think of it as abandonment or murder. There are pieces we've created that are either too amateur or too personal to share with the world, and no one is going to stop you from burning those pages. Or don't burn them. Stomp on them. Shred them. Vent your frustration and scribble all over them. Whatever it takes.

Although we as writers don't necessarily always know when something is working without someone else's input, there are times when we know in our writerly guts that something is wrong. Maybe you had an idea that turned out to be a dead end. Maybe a particular topic is off-limits after all. These are the times when it's okay to listen to that instinct and pull the plug.

Email ThisBlogThis!Share to TwitterShare to FacebookShare to Pinterest
Labels: adventures in rejection, writing

The dreaded pile of books "to be read."

No, dreaded is the wrong word. It's a pleasure to have that stack available. Because you never know what you might want to read next, right? It could be that historical biography, or perhaps a novella. Maybe it's a celebrity memoir or the hottest YA novel. In other words, the "to be read" pile represents a world of possibilities.

But what do we do when it gets unmanageable? Because it will, eventually, become so large as to seem insurmountable. Perhaps you found a ton of books on sale at a library or flea market. Or maybe you've rediscovered some cache of volumes you put aside years ago. Suddenly, there is nowhere to store all of them.

Personally, I am a fan of culling: sitting down and being honest with myself about whether or not I will ever get around to a particular title. I've impulse-bought more books than I can count, and it's important to me to reevaluate from time to time, in case I realize that a certain topic isn't really the best thing for me to explore.

In an ideal world, there would be enough time for us to read everything that interests us. But we live in an imperfect place where time isn't as abundant as we would like--or need--it to be. We do the best we can, including tackling that pile to the best of our ability.