I have very clear memories of the night Harry Potter and the Deathly Hallows was released. It was July 2007, and I was home for the summer. My mother had pre-ordered a copy from Border's (RIP), and she sent me and my father to pick it up. Being a big-box store, there was a ton of floor space. Yet no more of it was available, and bodies spilled out into the lamp-lit parking lot.

Dad stared at the crowd, confused by the spectacle before him. "What is going on here?" he asked me.

I swept my hand around, indicating the throng engulfing us. "This is pop culture."

The moment was an important one, I think, both for me and Dad. As far as I was concerned, it was unspeakably exciting to be present for a historical literary moment. Meanwhile, Dad finally had some insight into what I had been doing with my life (both as a creative writing major and a pop culture semi-scholar). It was tinged with sadness, though, as THE TIME had come: that instant where every devoted fan realized that this was the last time we would tear through the pages of a Harry Potter book in unbridled anticipation of how his story would turn out.

Since that night, the series' author, J.K. Rowling, has been expanding the Hogwarts universe at a regular clip. We've witnessed the arrival of Pottermore, her interactive online community; although the book itself was released in 2001, Fantastic Beasts and Where to Find Them is coming to a theater near you this November; The Tales of Beedle the Bard, an important piece of the Deathly Hallows puzzle, was given its own standalone book in 2008; Harry Potter and the Cursed Child, not written by Rowling but based on a story she wrote, lands on the West End stage this week to be followed the next day by a published version of the script; and revelations about Ilvermorny, Hogwarts' North American sister school, have come to light via Pottermore in the past month.

I understand that Ms. Rowling has spent a great deal of her life immersed in the world of Harry Potter. (She is hardly alone in that, as her rabid fan base has proven.) But I also understand that she is in danger of failing to move on to other artistic endeavors, which we know she is capable of doing--witness The Casual Vacancy, as well as the Robert Galbraith/Cormoran Strike novels. And this is one of the deadliest activities in which an artist of any variety can engage.

Leaving aside the appropriative issues surrounding Ilvermorny and North American wizardry (I am looking in your direction, stereotypical assumptions about "mystical" Native Americans), which are distinct from the ongoing additions to the Potterverse, I think it would behoove Rowling to take a break from Harry James and his friends. There are so many other stories to tell, and I for one am interested to see what else she can give us.

I started with good intentions. I wanted to blog about writing and books and sometimes pop culture. But now, it's turned into something different.

Writing and books and pop culture are still my main topics, of course. But I've also branched off into discussing my mental illnesses, etymology, and occasionally life in general. While I try to keep my more political topics relegated to my Tumblr account, this site serves as something of a catch-all for the other things I'd like to discuss.

Believe it or not, there are times when I don't want to talk about books anymore. I think that's how I end up getting off-topic. And I also think that this is okay. Sometimes it's better to write anything at all rather than constrain myself. So I'm going to keep exploring these tangents in my brain, and I hope you'll explore them with me.

Email ThisBlogThis!Share to TwitterShare to FacebookShare to Pinterest
Labels: personal

Do you ever get the feeling that you're consuming too much?

This question could apply to a handful of things: too much food, too many resources, too much awful news whenever you happen to stop on CNN while flipping through channels. But in this case, I'm talking about consuming too much social media.

A few days ago, I was cruising through Instagram when I realized there was someone I wanted to follow but hadn't found yet. Looking her up was simple, and with a single click, I was subscribed to her feed. During this process, I noticed a striking number: 99.

This woman followed only 99 other Instagram accounts. I, meanwhile, was following over 600.

The difference in these two figures spurred me to action. I realized that those 600+ accounts would live without me. Although I didn't shut down my Instagram account--I love it far too much to let go--I did unfollow just under a third of the people or businesses on the list, clearing out anyone I had clicked on for truly specious reasons. It was satisfying to see their names go from green to gray.

We live in an increasingly digital world, and every time we open up a device with an Internet connection, the amount of content we are likely to see skyrockets. That can't be good for us, operating as we are in an environment that bounds from one topic to another in mere seconds, and that's taking only television or online news into account. Add in Facebook, Tumblr, Twitter, and Instagram, among others, and you have endless ways to suck time away from your family, friends, or projects.

While my account is still active, I have quit using Twitter for this very reason. The number of links offered up in the span of only a minute is dizzying; the Twitter feed is in constant motion. Even if I could speed-read, I doubt that I could get through all of the content available for my amusement before a new day began and the process started all over again. That's some Sisyphean shit right there.

I've even stopped paying close attention to the links available to me on Facebook. I may be interested in a wide variety of topics, but trying to read every article about each of them means giving up other things, like writing time. And I'm not about that life.

But more than anything I've mentioned, I'm curious about how we got to this point. Even though we have more news available than ever, which helps marginalized groups make themselves heard, there's a paradox at work: it's difficult to discover those voices precisely because there is such an abundance of media at our disposal. When did we decide that we must play into the hands of distraction in such a way? And what can we do to scale it back to the point where various media and social media outlets bring us together rather than contributing to the fractiousness we're experiencing right now, both in America and around the world?

These are the questions I'd like answered. Meanwhile, I'm happy that I axed so many accounts on Instagram. This way, I get to see more content that actually means something to me or might prove inspirational.

Email ThisBlogThis!Share to TwitterShare to FacebookShare to Pinterest
Labels: personal 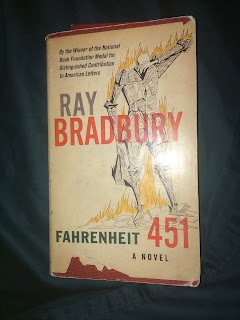 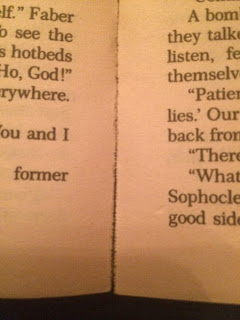 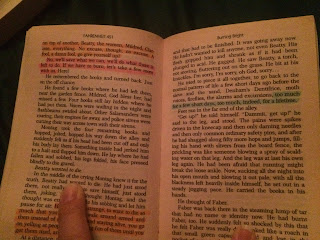 PS The images intersperse throughout the text are photos of my own copy of Fahrenheit 451, which I have had for approximately 15 years. With each re-reading, the spine weakens a little more and I fall in love with a new line or paragraph. Someday, it will succumb to the ravages of time and use, but I wouldn't have it any other way.
Posted by Cate at 7:55 AM No comments: