"Think I'd Be Safer All Alone" (From the Archives)

The egregious spelling error in the title notwithstanding, "Vasoline" is a pretty boss song, and the perfect choice for following up "Meatplow." Not only is the tone of the song different--more meditatively baffled by life than obviously angry--but the actual musicianship is different. Dean and Robert DeLeo's guitar work here provides a sense of things to come in STP's future as well as looking back on an important influence: punk rock, but it never really crosses into grunge territory, and thank God. Eric Kretz percusses like a madman, which gives us a sense of his true abilities (something upon which he'll build later on the album). And then there's Scott Weiland. 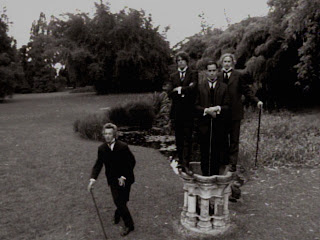 A still from the video for "Vasoline." Scott Weiland is on the lawn; other band members are on the columns.

On the vocal front, things get interesting. We learn here that Weiland has finally settled into a style that makes sense for him, rather than trying to shoehorn his voice into the grunge norm (which is part of what led to the band garnering comparisons to Alice in Chains and Pearl Jam in the first place--neither of which is particularly accurate, if you take into account their entire body of work). The clearer approach he takes here is one that comes up time and again throughout the course of Purple, particularly on "Interstate Love Song," "Pretty Penny," and "Big Empty": just do what comes naturally and don't get too overwrought.

All in all, "Vasoline" provides a refreshing glimpse into the possibilities of Stone Temple Pilots as a viable and vital musical entity. And from here on out, things start looking mighty bright for the gentlemen who started out as Mighty Joe Young.

Fun fact: the music video for this song comes in three different versions--X, Y, and Z--which each contain the same basic images but rearranges them. The more motivated among you may have fun searching for and comparing the videos to each other on YouTube.

Come back tomorrow to read about "Lounge Fly," the song that indicated a sea change in STP's output.