Theoretically, at the time of its release, "Lounge Fly" was not "STP-esque"--up until then, including on the first two tracks of Purple, the band was lumped into the grunge category with Alice in Chains, Soundgarden, Nirvana, and their mortal enemies Pearl Jam. In practice, though, "Lounge Fly" is, in fact, the song that disproves that theory. Not only does it depart from the grunge sound, but it also sets the stage for experimentation later on the album AND acts a harbinger of things to come later (for example, the psychedelic stylings of Tiny Music and some monstrously loud work on No. 4).

One of the things that most strikes me about "Lounge Fly" every time I hear it is the drumming. Allegedly, Eric Kretz ended up in the band after Robert DeLeo and Scott Weiland saw him playing in another band and were amazed at how loud he was. When I saw STP in concert in 2008, I knew exactly what they meant--dude is thunderous, to say the least. And nowhere is his might as obvious on Purple as it is here: he pounds out every beat with purpose and precision, and the end result is a primal mix that makes you want to turn it up to eleven. 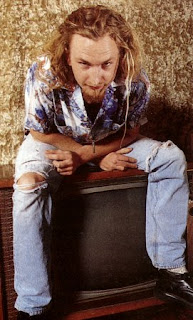 Eric Kretz, whose drumming so dominates this song.

As for the lyrics, Weiland gives a quick, dirty delivery in the verses. There are a few songs that encapsulate certain emotions for me. For example, "Wichita Lineman" evokes the exquisite pain of a long-distance relationship. "Time of the Season" is the perfect example of what happens when you put lust before everything else. And "Lounge Fly" is a quintessential self-doubt tune, because Weiland puts it all out there early on when he sings, "I think I'm free, but the dogs, they won't release me." The chorus is also affecting, and the way Weiland tells us that "I can't give what I take away" drives home the point of the song: this is a young man stuck in a whirlwind of emotion. (Remember what I said about frustration being the watchword for Purple?)

Fun fact: pretty much everyone who grew up in the '90s will recognize at least part of this song--the opening loop was used as the MTV News Break theme song for years.

Come back on Monday to read about "Interstate Love Song," one of STP's most enduring hits!