When I was in college, a classmate of mine turned to me, apropos of very little, and said, "You were a goth in high school, weren't you?"

I gotta tell you: in my head, I heard an actual record scratch. And then I turned to him and said, "What?"

Apparently I give off a certain vibe, because at least two more people have brought this up independently of each other over the years. There is also a popular idea floating around out there that I am the real-life version of Amy Farrah Fowler from The Big Bang Theory, possibly prompted by my fleeting resemblance to her in both looks and demeanor (I don't know; I've only seen like two episodes of the show).

As a side note: when I was in the process of writing this post, my friend Melissa sent me a picture of Amy Farrah Fowler making a face because she has been in on this conversation since the first time someone compared me to that character: 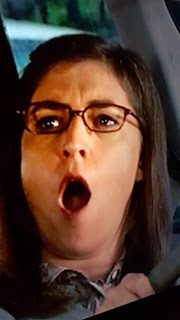 And here is a picture of me: 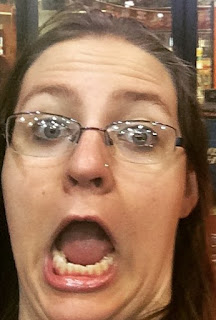 Honestly, I don't see the resemblance.

At any rate, neither of these assumptions is correct, at least in my view. While it is true that I wear a great deal of black, I never did the pale skin/raccoon eyes thing, I wasn't a fan of Marilyn Manson with the exception of two or three tracks, and I wasn't part of the Hot Topic scene. To my knowledge, I've never undertaken a course of study in physics, nor do I havea doctorate. (It's just me and my lowly MFA over here. Wait, did I say lowly? I meant MOTHERFUCKING AWESOME.)

For the most part, I am just me: an amalgam of quirks and influences, personality traits and genetic materials. This is true of everyone else in this world, as well. Try as you might to label anyone, they will always find a way to subvert your expectations, whether it's the "goth" girl who has a soft spot for pop music or the "nerd" who appreciates sports as much as science. So don't go making judgments based on your interpretation of the evidence at hand. Just let people be who they are (unless they're jerks, in which case it's totally okay to gently recommend that they be less mean.)