Way back in 2012, one of my early blog posts on this site was about what I read. I subsequently added a post about the poets whose work I reference most often. Maybe I was prepping myself, however subconsciously, for today's discussion.

What should you read? There are two basic schools of thought: the canonical purists and the laissez-faire experimenters. Guess which kind I am.

Yes, I'm a do-what-you-want kind of girl. To tell you the truth, I think the idea of an academically-defined canon is bullshit. What I consider essential, required reading differs greatly from the next person's idea of necessary novels. For example, I believe every fiction writer should read Mark Z. Danielewski's House of Leaves. Meanwhile, when I was in grad school, I had a professor who was one of the dreaded Raymond Carver devotees, and I found Carver to be a waste of time. (Yeah, that's right; I said it. Come at me, bro.) 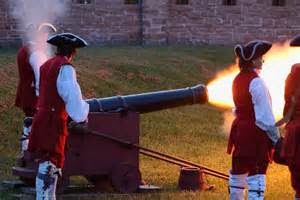 The American Revolution was fought over the canon; forces employed cannons. Or something.

So get out there. Read some books. Or magazines. Or cereal boxes. Whatever piques your interest and makes you think! I'll be doing the same on my end, of course, and I can guarantee you the books on my list are ones that work for me.

Image via some defunct website. I had to search Yahoo Images for "firing cannon" instead of "cannon" because "cannon" takes you to an endless stream of pictures of Canon cameras. Someone needs to learn how to spell, and it's not me.
Posted by Cate at 7:11 AM