On Ink and Emotional Trauma

The day after I got my third tattoo, I realized something. This was a complicated epiphany, since it linked back to an issue I'd been having recently. A girl I knew was cutting herself on the regular, and a mutual friend of ours asked me if I could explain the impulse to self-mutilate to him. I told him that although I had never--and would never--cut, I understood that she felt the need to release her emotional trauma through physical pain. As I suffered from the aftershocks of my latest expedition to the parlor, gently cleaning my wrist and trying not to accidentally scrape at the raw skin there, it hit me: I was a cutter.

This isn't the literal truth, of course. But I've been marking time--and emotional pain--with my tattoos. Each of the three coincides with a traumatic event (or series of events) in my life. 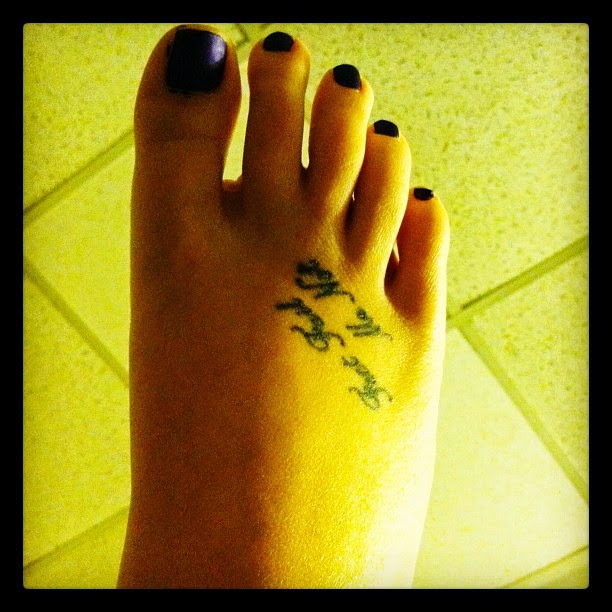 I am 20. I have just gotten my first tattoo, done my by cousin Scott Morrison at N2Skin in Farmington Hills, Michigan. (Scott is now at Avatar in Clarkston, Michigan.)

It is on my right foot and says, "Feet fail me not." One of two things usually happens when people see it: 1) they say, "Oh, that's so sweet!" as if the sentiment isn't deadly serious, which it is to me (more on that in a minute) or 2) they say, "Where do I know that from? It sounds so familiar." (Answer: here.)

One time, a guy at the Wal-Mart auto center sees my tattoo while I wait for an oil change. He looks from my foot to my face, then back to my foot, then asks, "Why would you do a thing like that?" I want to punch this dude. But because I don't feel like getting arrested, I simply say, "It felt right."

And it did. This phrase was chosen for dual purposes. First, it is a reminder to myself: when life trips me up, I have to keep moving. Second, it is a not-so-obvious homage to my hometown, since I can't quite bring myself to get the standard "D" tattoo opted for by so many of my compatriots from southeastern Michigan.

The first purpose is the most important. My significant other has broken up with me on our anniversary. I am crushed, spending my days moping abut the house when I'm not working part-time as an intern at a masonry magazine (bricks and shit, not old men who allegedly hide treasure). Right now, more than anything, I need something real, tangible, telling me that I will survive the experience. And that's how I end up putting needle to flesh the first time. 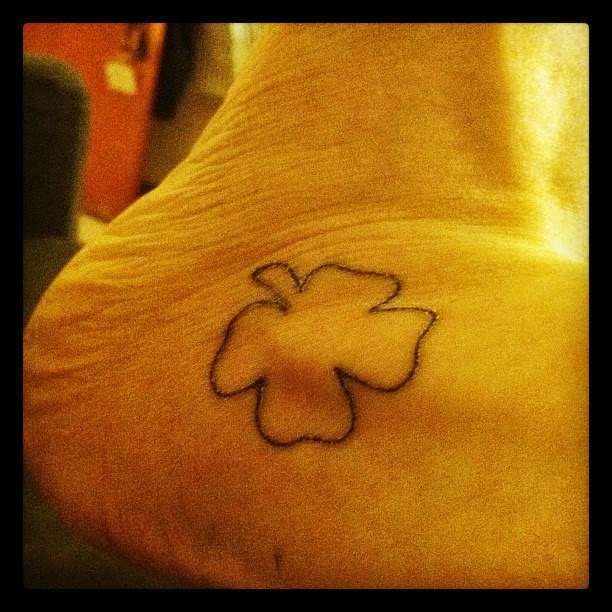 I am 26. I have just gotten my second tattoo, done by Joe Almquist at Blue Flame in Raleigh, North Carolina.

In the past four months, I have managed to finish grad school while simultaneously suffering through a mental breakdown. Nothing has been easy for me recently. While I would like to have Scott tattoo me again--he's family, after all--the urge to do something is too strong, and on a weekend trip to visit my friend at her parents' house in the Triangle, I turn to her and say, "Wanna go get a tattoo?"

She won't let anyone touch her with a needle, but that's okay. I don't need her to alter the canvas of her skin, I just need her to go with me. Before we leave, I make sure I have a picture of the four-leaf clover necklace I bought myself as a graduation gift, because this is what I want: a bit of good luck.

Since I started my graduate studies, I've lost two of my three dogs (the first was put down shortly before I matriculated) and my nephew, endured some very bad and scary times at work, seen my mental health deteriorate, watched my aunt battle ovarian cancer, and had so many crises of confidence it's verging on absurd.

When I walk into Blue Flame, I know the experience is going to be incredible. There's a jackalope skull on the wall, and I couldn't ask for a better sign than that, since I want so much to believe in the jackalope. Joe puts me yet more at ease by cracking a joke: “This is my first day on the job, and I totally fucked up on the guy who came in before you.” His professional humor is what I need, and I laugh heartily for the first time in days. 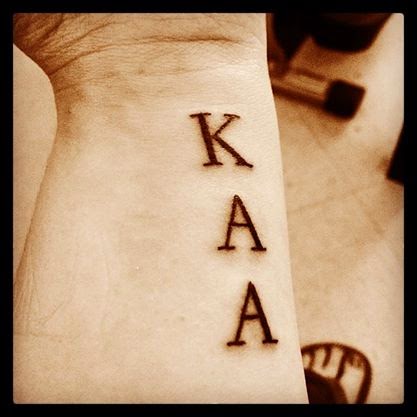 I am almost 28. I have just gotten my third tattoo, done by Alice Underdahl at Valhalla in Southern Pines, North Carolina.

Because it would be too much to ask that I have a normal, quiet, stable life, the tempest continues to rage. My job security is never certain, I'm struggling to get my work published, I've been through a string of sort-of relationships that have torn me up, my grandmother is constantly ill, my aunt has succumbed to the scourge of cancer, my mother is stretched so thin it's difficult to watch, and my depression and anxiety are worsening.

Since the death of my nephew in 2010, a niece and another nephew have arrived. My brother and his wife say they're through having kids. Because I don't want children of my own, these three are my surrogates and the only unconditional thing I have. Everything I do, I do because I'm trying to impress them, and that includes making attempts at getting my life in order. So I've chosen my third--and possibly last--tattoo: their first initials, on my left wrist where their presence will be duly noted from the start of each day to the end of it.

Alice is the nicest artist you could hope to have. She is cheerful and funny, and she lets me ramble about my other two pieces while the needle whirs. When I explain the significance of these three letters, she actually thanks me for letting her be part of the process. It's all I can do not to cry in the shop.

When I leave, I feel calmer, better, stronger.

Some people choose their tattoos because the art is interesting or intriguing. My choices always arise after much deliberation and personal strife. Maybe this is because I'm a writer: I have a compulsion to chronicle things, fictional or otherwise. Or maybe it's because I want to remember that I'm still standing in spite of whatever it is that's trying to knock me down, whether it's my own brain or life in general. Either way, I have scarred myself, but I have no regrets.

However, not everyone finds this to be the best strategy for dealing with their pain. If you or someone you know is suffering from self-mutilation (whether it's cutting, wrist-banging, or something else), please seek help. There are less dangerous and harmful coping solutions available to all of us, and I recommend you check out what the Mayo Clinic has to say about the practice of self-injury if you need a good resource. You can even talk to me if you want: I'm always available via e-mail at cateismilesaway@gmail.com

Email ThisBlogThis!Share to TwitterShare to FacebookShare to Pinterest
Labels: i got a case of body language, personal, speak memory