"You Know I'd Beg for You" (From the Archives)

I have a confession to make: I am not always as gung ho about STP's output as I claim to be.

As a matter of fact, there are three songs in their repertoire that I rarely allow myself to hear. One is "Huckleberry Crumble" from Stone Temple Pilots (I hate the title and think Scott Weiland sounds ridiculous), "Days of the Week" from Shangri-La Dee Da (which is so NOT-STP-esque that I can't even handle it), and "Still Remains," the track that follows "Interstate Love Song" on Purple. 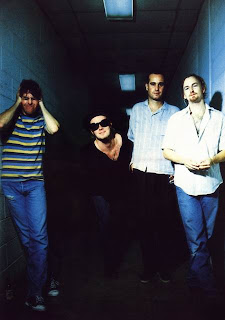 Weiland's vocals are uneven, and ultimately, it's like any other overwrought love song out there. However, I can't fault STP for this tune. After all, they were bound to record an ode to their loved ones eventually.

The good news is that there is a certain melodic sensibility that saves "Still Remains" from itself--take away the lyrics, and it's not so bad. It's also in an important place on the album: if it wasn't a buffer in between "Interstate Love Song" and "Pretty Penny," we might not be able to appreciate those songs as much, because they wouldn't have proper bookends.

Fun fact: there are no fun facts about this song.

Come back tomorrow and join me as I take a look at "Pretty Penny"!