"Her Dizzy Head Is Conscience-Laden" (From the Archives)

Tell me the truth: is there any song better suited to a long drive on a dark night of the soul than "Big Empty"? From the opening notes--both bass and guitar--to the heart-rending way Scott Weiland delivers the classic line, "Too much trippin' and my soul's worn thin," "Big Empty" is the epitome of lonely roads-angst. Of particular note is the repeated bridge line "Conversations kill," which is so true on so many levels, particularly when you consider that, at the time, Weiland was in the throes of his first experience with addiction and trying desperately to hide it from everyone around him: discussing it would have injured him, indeed. 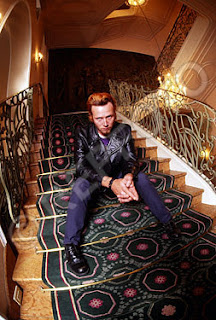 Scott Weiland, the man behind the voice.

One of the best things about this song, aside from the lyrics, is the way the four members of the band work so hard to give each other space. Dean DeLeo's guitar never outshines Robert DeLeo's bass, and Eric Kretz's drum work rolls along in the background, definitely there but sharing the song. Meanwhile, up front, Weiland's vocals are restrained, though he perhaps retains too much of the grunge influence on the chorus. All in all, this song just WORKS, and I have a feeling it will be a staple on radio stations for years to come.

Fun fact: although it was woefully misused, "Big Empty" was written for The Crow, that legendary 1994 film starring Brandon Lee, and was the first of STP's work employed in such a manner.

On Monday, we'll explore the energy-filled three and a half minutes that make up "'Unglued'"!