"Fine Place for a Day Full of Breakdowns" (From the Archives)

Purple opens with “Meatplow,” which itself begins with four heavy, intimidating notes belted out by the DeLeo brothers. Those four notes could be a throwback to Beethoven’s fifth symphony and that infamous “fate knocking on your door” opening. They could be a musical interpretation of angry screaming, a response to the critical mistreatment of the band up to that point. Or they could simply be Robert and Dean’s way of showing off. Whichever explanation you prefer, the sound will grab you by the throat and pull you into STP’s world. 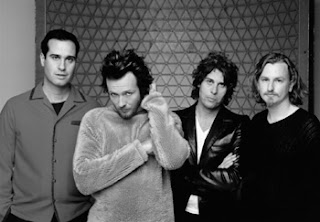 So Purple starts with a declaration of that frustration, when Weiland sings in "Meatplow,"


Fine place for a day full of breakdowns. / Takes more than a meltdown to show us how. / Throw a tack on the road, / Stop the meatplow; / Got a bullet but it ain't mine.

This sets the stage for an album-long manifesto against backstabbing, sniping, criticism, and--in some ways--self-doubt. Yet, as you'll see later, Weiland doesn't necessarily follow his own advice. Still, it's worth keeping "Meatplow" in mind when we move forward on the album.

Fun Fact: I love Stone Temple Pilots, but they don't love my car. I once (accidentally) rear-ended a woman to the strains of "Sour Girl." And just days before my junior year of college began, I was pulled over by a county sheriff's deputy to--you guessed it--"Meatplow."

Tune in tomorrow for a review of "Vasoline"!