Back in the day, when I was working on my first blog, What We Covet (RIP), I decided to branch out into food blogging with a venture called Food We Covet (double RIP). This endeavor was short-lived, due to several factors, including an unfortunate phobia of mine (triple RIP), but it came in handy when I took a course about food writing in grad school. One friend in particular--I'm not naming names, BUT YOU KNOW WHO YOU ARE--has made it known that she desires the return of Food We Covet.

While I can't (read: won't) make that happen, I am able to start a new feature here, starting today with a story about a disaster that occurred in October.

Like many mothers, mine has a stockpile of old cookbooks, though some of hers are hidden away in the basement. So while I was waiting for my laundry to finish up one day, I started perusing the titles when I found a slim little volume of pumpkin recipes; I later learned that she didn't even realize she had it, which is why it had been tucked away so long (the receipt inside indicated she purchased it circa 1993). 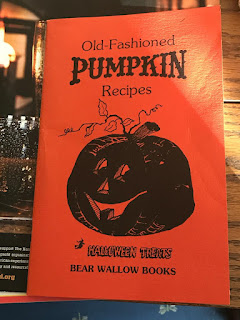 As it was Halloween month, I was pretty pumped (no pun intended, or maybe a little), and I decided to dive right in. Obviously I chose the toughest thing possible: a pumpkin soufflé. Soon enough, though, I asked myself the relevant question: WHAT THE FUCK WAS I THINKING.

Up until I got to the butter, things actually went pretty well. Canned pumpkin wasn't ideal, perhaps, but it was a nice way to save time. The ground ginger and nutmeg scents burst through my nose and immediately put me in the holiday mood. Even grating orange zest without a grater proved possible, if annoying (I used the ever-so-delicately serrated part of a table knife for this step, and my upper arms got a nice workout).

But then the butter wasn't as soft as I thought it was, so it wouldn't blend with the other ingredients, and I wound up with tiny shards of butter in the batter, visible even without my glasses. This is the part where I almost cried, but I hadn't gotten to the eggs yet, so I had to pull myself together in order to separate the eggs in precisely the manner you're told not to separate them, which is to say by pouring the albumen and yolk back and forth from one half of the shell to the other. This is, naturally, the way I wound up with yolks in the white and vice versa. But hey--nobody's perfect. 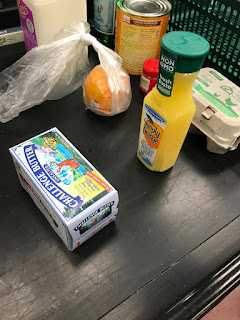 It turns out, though, that the separation itself wasn't the problem. Rather, it was the fact that no one has ever shown me how to "stiffly beat" egg whites, or more precisely the fact that it is difficult to do this by hand. The short version of this story is that they were not stiffly beaten, although I think it's fair to say they were vigorously swirled around. I'm 99 percent certain this is what went wrong with the recipe.

I say that because the soufflé was well on the way to rising. When I cut into it, the texture was too dense, too wet, and I knew it hadn't gone my way, but it was also spongy, and I could see that the outside walls of it had started to fluff up. 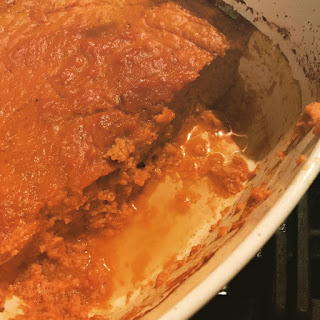 Because the batter hadn't fully set, the whole thing fell apart as I tried to serve it up to my parents. Mom, understandably, abstained after her first bite, and I agreed that it was wrong--the flavors were off because the texture was bad, and it felt more like eating mangled pumpkin stew than anything. Dad happened to enjoy it, so I bequeathed the rest of the entire dish to him.

At any rate, it was nice to be back in the kitchen after not really setting foot in one for awhile, at least with any intention behind it. And while I soufflailed--as I told my friends--it was worth the effort to learn a lesson about how not to do a thing. Maybe I'll never attempt another soufflé, though.

PS For copyright purposes, I won't be sharing the exact recipe here, but if you're interested, e-mail me at CateIsMilesAway@gmail.com for more information.
Posted by Cate at 7:30 AM