I have a deep and abiding fear of hearses. This is not a recent development. It's been going on since I was very young, and it started at Henry Ford Museum.

HFM is easily one of the strangest places in the country. With the exception of the Smithsonian Institution, few museums have such an eclectic collection. Where else are you going to find a Wienermobile, a Dymaxion house, and the actual Rosa Parks bus all in one building?

But they're also weird enough to have a collection of carriage-type hearses, which is how I acquired a dislike for them. These are towering, black, scary things. They look like something out of a nightmare. I can't go anywhere near them or I'll suffer a minor anxiety attack.

And yet, these aren't the most morbid pieces in the museum.

Exhibit A: the Lincoln chair. 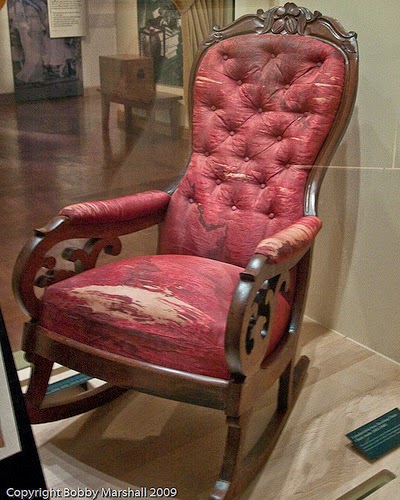 If you're wondering what I mean, exactly, by "the Lincoln Chair," I don't mean some chair Abraham Lincoln used in the White House. I mean the chair he was sitting in when John Wilkes Booth shot him at Ford's Theater. For the record, I've been told by reliable sources at the museum that the dark spot at the top of the rocker is not the President's blood but, in fact, discoloration from hair oil. But the fact remains that they own a piece of presidential assassination memorabilia.

But wait! That's not all.

Exhibit B: the Kennedy limousine.

See this picture, taken in Dallas right before JFK was shot? He's sitting in a 1961 Lincoln Continental SS-100-X.

Yeah. That car is also at Henry Ford Museum.

So apparently their thing is collecting bits of the past that are scary, violent, and depressing. It didn't occur to me until about five years ago that growing up seeing these things during family visits and field trips can really mess with your mind. I still haven't recovered.

And yet I wouldn't trade these experiences. Being able to examine such objects gives one a powerful sense of history and serves as a warning about what can happen--how quickly life can go from normal to horrifying. These are pieces of memento mori for people raised in an age when no one even knows what a memento mori is. And they certainly do remind us of our mortality.

Kennedy image via Wikipedia.
Posted by Cate at 7:51 AM